Please note that we use cookies to provide highest-quality services. By continuing to use the website lublin.eu you accept that cookies will be placed on your device. You can change your browser settings at any time. More information can be found in our Privacy Policy.Close
You are here: Home page Science and educationEducational potential of the city

Owing to the comfort of living in the city and a high standard of education, students readily choose Lublin. Despite a decline in the number of students, resulting mainly from the population decline in the country, the number of students in Lublin has remained at a similar level. Compared with the previous academic year, it decreased by only about 0,5%. In total, there are 65,000 students in all higher education institutions, including almost 6,500 foreigners.

The firm position of Lublin’s universities in the academic community is testified by their presence and very good scores in both national and international rankings (np. Webometrics Ranking of World Universities). At this point it is worth noting that the John Paul II Catholic University of Lublin (KUL) ranks 9th and the Maria Curie-Skłodowska University (UMCS) ranks 13th in the national ranking of universities Unirank (http://www.unirank.pl/ranking-uczelni-unirank). Moreover, according to data of the Ministry of Science and High Education, the University of Life Sciences in Lublin ranked among the top ten (9th) most popular high education institutions in Poland in the academic year 2014/2015.

In  support of students’ multidirectional development, the higher education institutions provide them with opportunities to participate in interesting events and initiatives of both academic and non-academic nature. What attracts young people to Lublin’s high education institutions are the unique academic climate, valued academic staff, and the diversity of fields of study: from technology and life sciences to medicine, the humanities and arts.

Popular groups of study programmes in Lublin include economy related courses, as well as transport, trade and logistics courses. Engineering, technical and medical courses are also willingly chosen by students in Lublin. 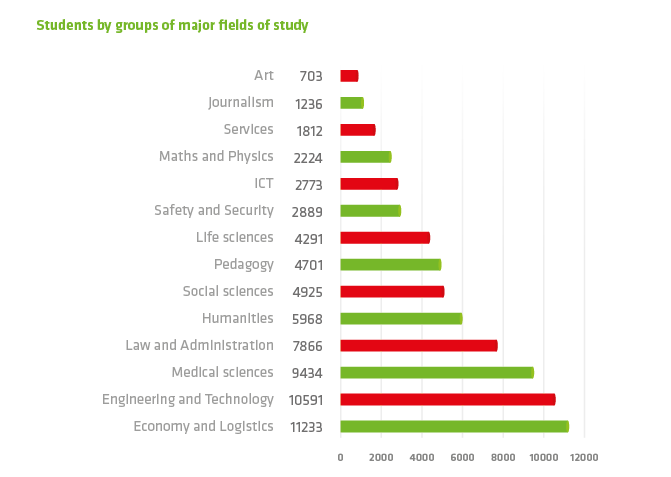 In times of  dynamically changing needs of the labour market, education must be a multidisciplinary process.  What remains one of the key features of graduates of schools of higher learning expected by employers is foreign language competence. Increasingly often, the knowledge of two or even more foreign languages is required.

Lublin’s leading schools of higher education are aware of this and are continuously expanding the range of the foreign language taught. There are now 4 to 8 different languages to choose from, with two being obligatory at most universities and colleges in Lublin (only the College for Social Sciences, the University of Vincent Pol , the Medical University and the University of Technology requiring 1 language). In addition to modern languages, KUL requires Greek and Latin. UMCS offers courses in Norwegian, Chinese, Portuguese, Ukrainian and Bulgarian. English prevails at private institutions, with Spanish, German or Russian available as options.

In addition to foreign language courses, languages can be learnt in dedicated fields of study. A high standard of education in those fields is noteworthy. Each year many students in Lublin major in foreign languages. These are mainly English, German, French and Russian, but less popular languages, such as Dutch, Bulgarian or Chinese, have been attracting increasing interest.

The opportunity to pursue third-cycle (or doctoral) studies at Lublin’s higher education institutions is another aspect testifying to the high rank of this academic centre. Those interested can find about 40 doctoral fields of study at different public universities. The fields include the humanities, veterinary, medical, legal, engineering, economic, business, IT, and many other areas.  About 6.9% of all doctoral students in Poland study in Lublin, which makes it rank 6th in Poland. 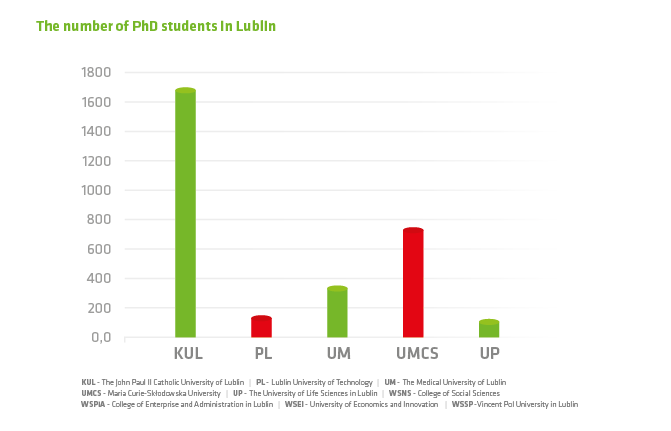 Source: In-house study based on data provided by higher education institutions in Lublin, 2015.

As a strong academic centre, Lublin is also a place where education can be continued in postgraduate courses. In the academic year 2014/2015 there were almost 5,000 graduate students, including 40 foreigners. The greatest interest was recorded in the fields categorised under the Pedagogical, Teaching and Medical subgroups.

It is worth noting that postgraduate studies programmes enable acquiring specific competencies and additional qualifications. This form of lifelong learning is perceived as the most flexible due to its potential when it comes to the adjustment to current needs of the labour market. 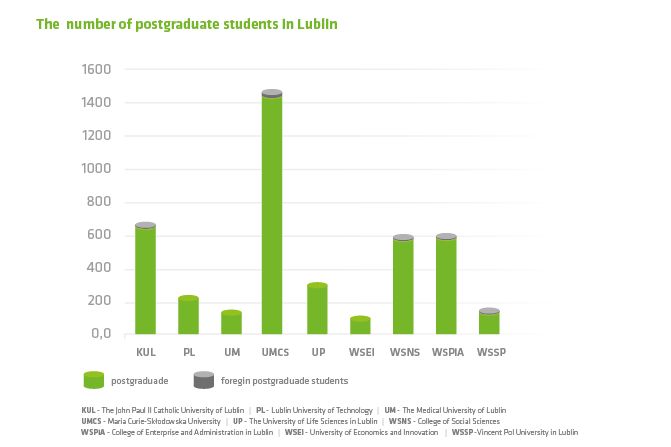 Source: In-house study based on data provided by higher education institutions in Lublin, 2015.

The quality of education is largely determined by the academic staff potential. Lublin is an academic centre with scientific research staff representing a high standard. Their discoveries are not only known, but also developed and employed by other scientists in Poland and abroad. Representatives of academic staff in Lublin may boast high scientific expertise and reputatin. What is also of great importance is that they are widely known and apprieciated by students as academics. According to young people, staff at universities in Lublin is friendly and encouringing students to meet new challenges and to follow the scientific path.

Scientific research as well as consulting and expert activities are connected mainly with the needs of the region, and they are largely of a general, universal nature. As a result, scientific publications, patents and protective rights are created. Many research teams closely cooperate with foreign and domestic centres (under bilateral agreements in many cases).

Universities actively support local industry innovations based on their scientific research potential. Successful cooperation between Lublin scientists and local companies and the possibility to apply the results of their joint research in production determines the growth rate of sectors such as biotechnology, pharmacy, information technologies or advanced services.